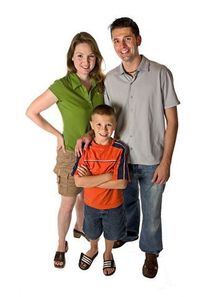 What's Family Therapy,
& How Does It Work?

Family Therapy was a revolutionary idea when it first started in the 1960’s. Until then, adults and children with emotional problems either suffered alone, went into Freudian psychoanalysis four days a week at great expense, or if their condition was severe enough, wound up in mental hospital wards.And they didn’t get much better.

A number of psychiatrists around the country began to think of their patients not as sick individuals, but as people embedded in family systems that were not functioning in a healthy manner.

As family therapist Eugene Kayser writes in the article What Is the Family Dance? they started to experiment with treating the whole family, and discovered that their patients improved.The idea that you could treat the entire family and provide relief for individual members changed the way we viewed mental health and how to treat mental health problems.

It was also around this time that therapists began to divide patients into people who had problems dealing with other people, and those who had biologically-based mental illnesses. Medicines, such as Prozac, began to be developed that made it possible for the mentally ill to ease or eliminate the symptoms, and function better in society. An upcoming article will deal with the history and impact of psychotropic drugs.