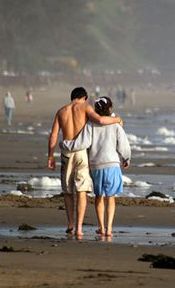 Is Marriage Really Good For You?

The good news: Marriage is good for your health! Happily married people have less health problems. Suppressing guilt or hostility increases blood pressure, lipids and blood sugar. While married men tend to be older and heavier, with higher blood pressure and cholesterol than unmarried men, they were only half as likely to die.

A cohesive happy marriage can lower increased blood pressure from a bad day with the boss at work. What does "cohesive" mean? It's defined as couples who laughed and did things together, worked on common projects, and did not "scream and shout" at each other. Instead of taking out their frustrations out of their spouse, they talk about them.

On the whole, it is healthier to be married. Married men and women smoke and drink less, are more active, and are sick less often. They feel better with less stress, fewer headaches and even less back pain

For every good marriage this year, there is roughly one divorce. The last U.S. Census showed that 55% of us were married, and 12% divorced or separated. And people are waiting longer to get married: 59% are between people in the 30-34 year-old age group.

So, what are the big stressors on married couples? In the first year, they include financial pressures and the creation of a balance between work and family life. This is the time when couples are establishing their careers, learning how to become a family on their own, how to spend leisure time and money, and separating from their families or origin. As a couple, they are responding the needs of being in an intimate relationship, and establishing their identity as a couple.

There are a lot of demands and pressures from their friends and family on their time and energy. This is a time when the historic baggage that they bring with them from their original families starts to make itself known. 29% of couples report infidelity, 39% are dealing with serious financial problems. Physical abuse is reported to occur in 12% of married couples. And frequently these pressures lead to separation and divorce.

Unfortunately, separation and divorce can make you physically and mentally ill. There can be an increase in anxiety and depression, as shown by increased rates of physical illness brought about by suppression of the immune system, and increases in the rate of auto accidents, violence and suicide. The effects on children going through their parents’ separation and divorce can be catastrophic: they become depressed and withdrawn, their social skills and academic performance deteriorate, and frequently there are conduct-related problems.

Research has shown there are strong links between marital discord and the level of depression in women, brought about marital stressors, losses of intimacy and spousal support. 38% of women who experienced these stressors developed depression. And those who experienced humiliation or devaluation were six times more likely to be diagnosed with major depression. Women may be particularly vulnerable to depression because they are brought up to develop a sense of self that is rooted in their relationships with others.

In fact, a stressful, high-pressure job coupled with an unhappy relationship may be hazardous to your health. When couples have nasty fights involving put-downs and sarcasms, our immune systems pay the price. Stress hormones like cortisol and norepinephrine, which are there to help us react to physical danger, kick in which reduces the supply of disease-fighting immune cells.

Fights appear to physically effect women more than men. Angry words seem to raise levels of cortisol higher in women than in men. One study showed women with increased cortisol levels were more than twice a likely to have been divorced.

This may be because women are more emotionally sensitive to marital distress than men. Married women who remain silent during fights, and keep their feelings to themselves, are four times more likely to die of cancer, heart disease and stroke, as well as suffer from eating disorders, irritable bowel disease and depression. And studies have shown that conflicted couples who fight using criticism, sarcasm and put-downs, can take 40% longer to heal from all kinds of wounds than happily married couples.

REMEMBER: Laughter is good for your marriage and your heart. 15 minutes of laughter each day gives the same cardiovascular benefits as exercise, because it stimulates the blood flow.

(Return from Marriage Is Good to the Marriage Counseling page)

Gene Kayser uses the Gottman Method Couples Therapy system with his clients, with it's proven techniques & strategies for couples who want to save their relationship. This is a "nuts and bolts" approach based on 40 years of research & treatment.