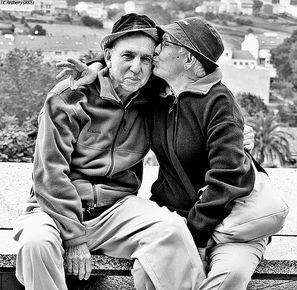 Good Marriage Or Failed Marriage?
What Works & What Won't!

What makes a good marriage? Research by psychologist John Gottman found that it is important to have what he calls the Magic Ratio of 5 positive interactions for each negative one. So, let’s talk now about how couples behave with one another in a successful marriage.

Successful couples all do the following things:

Show Interest in one another. In a good marriage, when their partner is speaking, whether arguing or not, they are obviously interested in what the other is saying. Their minds are not wandering, thinking up the next arguing point, or watching TV. They are paying attention.

Are Affectionate with each other. They show this in little ways, such as touching, holding hands, and expressing their affection for their partner.

Show They Care by committing small acts of thoughtfulness, such as bringing flowers or a gift without a particular occasion, or making phone calls just to say “Thinking of you.”

Show Appreciation by thinking, remembering and saying positive things about each other.

Show Concern by paying attention to things that are bothering their partner, and being supportive without trying to fix things.

Are Empathic by showing they really understand what their partner is going through.

Are Accepting. Even when they disagree, they let their spouse know they understand and respect their point of view.

Joke Around. Good marriage partners use humor, silliness and teasing in a loving way, never in a hostile or sarcastic manner.

Share Their Joy. When they are delighted or excited about something, or having fun, they let each other know.

The important thing to have a good marriage is to maintain the Magic Ratio of 5 good things for each negative thing that happens between you. Let’s take a look at what psychologist John Gottman calls

THE FOUR HORSEMEN OF THE APOCALYPSE.

After studying couples that wound up divorced, Gottman found that their arguments and conflicts had four things in common that almost guaranteed that a marriage would fail. He called them The Four Horsmen. And he had a 94% prediction rate.

So here they are:

CRITICISM. The First Horseman shows itself by attacking and blaming your spouse’s personality or character. For instance: “You are just lazy! You never take out the trash!” Criticism seems to be close to complaining, but it is different. It is an attack on the very nature of the person in question. Complaining is about expressing anger, displeasure, distress or disagreement about your spouse behavior or an event.

You can tell the difference by the way it is said:Criticism begins by saying “YOU are…. (fill in the blanks)” while a complaint starts the sentence with “I...(need, don’t like, etc.)”

CONTEMPT is the Second Horseman. Here the intention is to insult and psychologically abuse your partner. Here are some examples of this:

Negative Body Language such as sneering and rolling your eyes.

DEFENSIVENESS. The Third Horseman is evident when our automatic response to thinking we are being attacked is to react defensively. This may have been a lifesaver when we were running from wild creatures in pre-historic times. But when it occurs in arguments, it only escalates the conflict.

Here are some behaviors to look for, in yourself and others:

Denying Responsibility - “I’m not to blame.”

Making Excuses, - “I couldn’t help it. There were forces beyond my control…." "The dog ate my homework!”

Disagreeing with Negative Mind-Reading - Mind-reading shows up when one person says they know what you’re thinking. If you start to argue about what they think you’re thinking, the whole thing spirals out of control. “You think I’m lying. Well… I’m not.” They may not be thinking that at all.

The Rubber Man/Rubber Woman Game - This is reminiscent of the childish saying “I’m rubber; you’re glue. Whatever you say bounces off me and sticks to you!”

STONEWALLING is the Fourth and most devastating Horseman.
This happens when one spouse shuts down and erects a brick wall to end the argument. It turns out men do this more than women, probably because men are more easily physiologically overwhelmed than women. What looks like a neutral position is actually the ultimate powerful act of aggression.

When all four of these behaviors are operating in a marriage, the outlook is not good. These couples are in a Negative Cycle, moving from Complaining to Criticizing to expressing Contempt. Then they begin Defending themselves and wind up Stonewalling. This is when they need to see someone who specializes in marriage counseling, and helps them to restore the good marriage.

If you are looking for a marriage counselor in the Phila., PA area
who uses the Gottman Method Couples Therapy... call:

for your free 30 minute phone consultation with